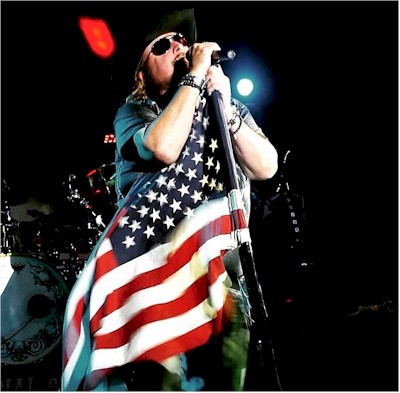 A native of Georgia, Colt Ford embodies the seemingly unusual pairing of the Southern country and hip-hop musical influences that he heard growing up in small-town America just outside Athens, Georgia, not far from the new Southern hub for urban music in Atlanta. His newly styled country music is truly a blend of many American musical styles, including country, rock, hip-hop and rhythm and blues. With this musical mixture, Colt blazes forward with a new, creative sound for the all-American everyman.

With encouragement from his wife, Ford wrote “Buck ‘Em” for the Professional Bull Riders, Inc and they quickly adopted the song as the new PBR anthem. He also wrote and recorded the theme song, “Huntin’ The World” for the hit television show, Huntin’ The World, Southern Style which received an award for “Best New Theme Song” at the 2009 Golden Moose Awards.

With his sixth studio album, the aptly named Love Hope Faith, his follow-up to 2014’s Thanks for Listening, Colt Ford continues to live out his boyhood dream – the one where you “wake up on a mission/to buy that beat-up Gibson,” as he sings on “No Rest.” Love Hope Faith is exactly that, a message to his loyal fan base, and a strike against the divisiveness plaguing our country, celebrating the things that bring us together – friends, family, our faith in a better future.

And while he admits to a populist fan base and down-to-earth, “Keepin’ It Real” attitude, Colt cautions, “I’m not a politician. I’m a musician, a performer. We have to get past our differences and find a common ground.”  And what better way to do that with Colt Ford’s groundbreaking hybrid of country, blues, rock and rap rhythms, who has built up a following that started with mud trucker events and graduated to arena status sharing the stage with the likes of golfing buddy Toby Keith.

Love Hope Faith is Colt Ford’s musical message, one so universal it tears down those walls, then invites everyone into the tent.